One of the most common mistakes I see in scenario-based learning is using feedback to tell learners what was right or wrong instead of showing them.
Take the following example of a branching scenario to practice counseling someone on dietary choices. One mistake learners can make in the scenario is setting a goal that is too difficult. If the learners recommend a goal of cutting out all added sugar and soda, you could simply tell them they’re wrong and why it’s a bad choice like this:

“Sorry, that’s incorrect. If a goal is too difficult, it can reduce motivation. A smaller interim goal may have a better chance of success.”

In scenarios, it’s better to avoid explicitly stating that a choice is right or wrong. That breaks the realism of the scenario and makes it an academic exercise rather than a practice simulation. Instead of just telling learners that it’s a bad choice, you can show them the consequences of their decision. In this example, I used both the dialog showing the response of the person being counseled and his facial expression. 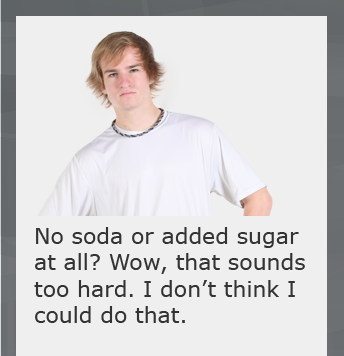 I selected a character from the eLearning Brothers library and picked five poses with a range of expressions from upset to happy. This is one place where it’s critical to have photos showing more than the standard stock photo happy expressions.  For each response in the branching scenario, I determined the motivation level on a five-point scale and matched the corresponding photo to the response.

For many scenarios, the dialog and expression of the person would be enough to show whether or not the choice was right, wrong, or somewhere in between. Sometimes you need additional feedback though. Because this scenario deals with an invisible factor (motivation), I created an additional consequence with a motivation meter. The level of motivation increases and decreases depending on the choices the learner makes. This is another way to show consequences within the context of the scenario without becoming so academic as to say “Sorry, that’s incorrect.”

Get Updates by Email